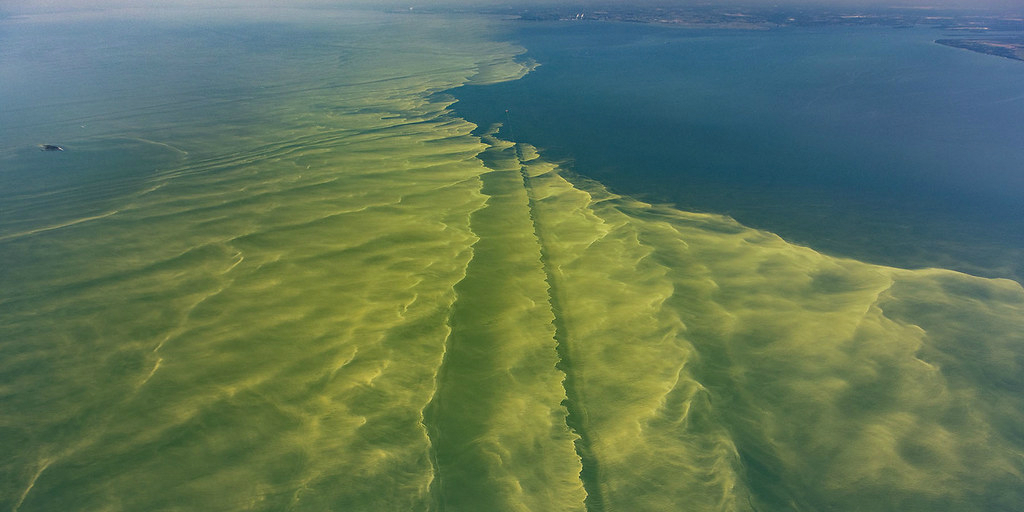 Satellite photo of the 2017 Harmful Algal Bloom in Lake Erie, courtesy NOAA.  This year’s bloom is predicted to be as bad or worse. Pivot Bio nitrogen producing microbes are a part of the solution.

It’s shaping up to be a record year for red tides and harmful algal blooms. Sweeping spring rains have washed fertilizers out of the field and into major waterways, impacting water quality in the Great Lakes and the Gulf of Mexico. Farmers don’t want to lose these nutrients. If those nutrients aren’t in the soil feeding crops, they’re feeding the microscopic algae that live in large bodies of water. Pivot Bio microbes offer a solution: nitrogen that can’t be washed away.

I am personally saddened that Lake Erie is one of many large bodies of water affected each year by harmful algal blooms. I grew up in Erie, Pennsylvania, home to Presque Isle State Park, a 4-mile sandy peninsula that attracts several million vacationers every year. My grandparents had a home on the lake where my family spent many weekends in the summer swimming, boating and fishing. As children, we freely went in and out of the water all day long with friends and cousins. Yet today, the National Oceanic and Atmospheric Administration (NOAA) posts twice weekly forecasts for harmful algal blooms so one can plan activities in the lake.

Even under the best management practices, nutrients can runoff from agricultural fields if the weather has been extreme. These lost nutrients play a role in the growth of harmful algal blooms. Algae, in the presence of abundant nutrients, grow to become massive colonies of green goop that get into water systems and make beaches slimy. As nutrients are depleted, the blanket of algae starts to die and the process of decomposition pulls oxygen from the water, suffocating fish and crustaceans.

This spring, heavy rains and flooding in the Midwest have carried more nutrients than usual out of the fields and into the waterways. Nitrate flows out of the field were 18% higher than average, with 156,000 metric tons flowing out of the Mississippi river basin and into the Gulf of Mexico in May of this year. As a result, NOAA is predicting that a dead zone the size of Massachusetts will form in the gulf - just shy of the largest dead zone ever recorded, 2017’s 8,776 square miles.

The Hypoxia Task Force estimates that in order to bring the size of the dead zone in the Gulf of Mexico down to a manageable 1,900 square miles, nitrate loads in the rivers feeding into the Gulf must be reduced by 45% by 2035. States have begun to enact new regulations such as Minnesota’s Groundwater Protection Rule and incentive programs, like the Small Grain and Working Lands Buffer programs in Ohio, both of which encourage best management practices. Rather than one-size-fits-all regulations or subsidized conservation protocols, farmers need better tools to provide nutrients where they’re needed.

Pivot Bio PROVEN™ is such a tool. Using microbes to deliver nitrogen changes the nutrient game. When microbes provide small quantities of ammonia daily, there just isn’t any excess ammonia available to turn into leachable nitrates. Instead of excess nitrogen that would be carried away in extreme weather, microbes stay close to the roots of the plant and only make nitrogen available as its needed. It’s a way to provide the necessary nitrogen, without the unnecessary excess.

NOAA is predicting that 2019 nutrient loads in Lake Erie will generate harmful algal blooms similar to those that prevented residents of Toledo from using their tap water for three days in 2015. It doesn’t have to be like this. I’m proud to be part of a team dedicated to re-thinking crop nutrition, doing our share to reduce nutrient runoff and keep our waterways, like Lake Erie, safe.

Discovering New Approaches to Microbes and Biotechnology at SIMB 2019

Pivot Bio 2021 Interns: The Proof Is In The Plot

Students from across the U.S. join Pivot Bio each summer to get hands-on experiences in a...